Visiting the historical marker for the very first time was emotional.  After working on this project for over 18 years, it is a bitter sweet moment to see the finished product. The most important words on this historical marker are the names of the fifteen men and boys that were murdered that night in 1918.  Many have written to me asking if their ancestors are on the marker because they haven't been able to see it. So here is the image for those who have not had the privilege of seeing the marker for yourself.     ​ 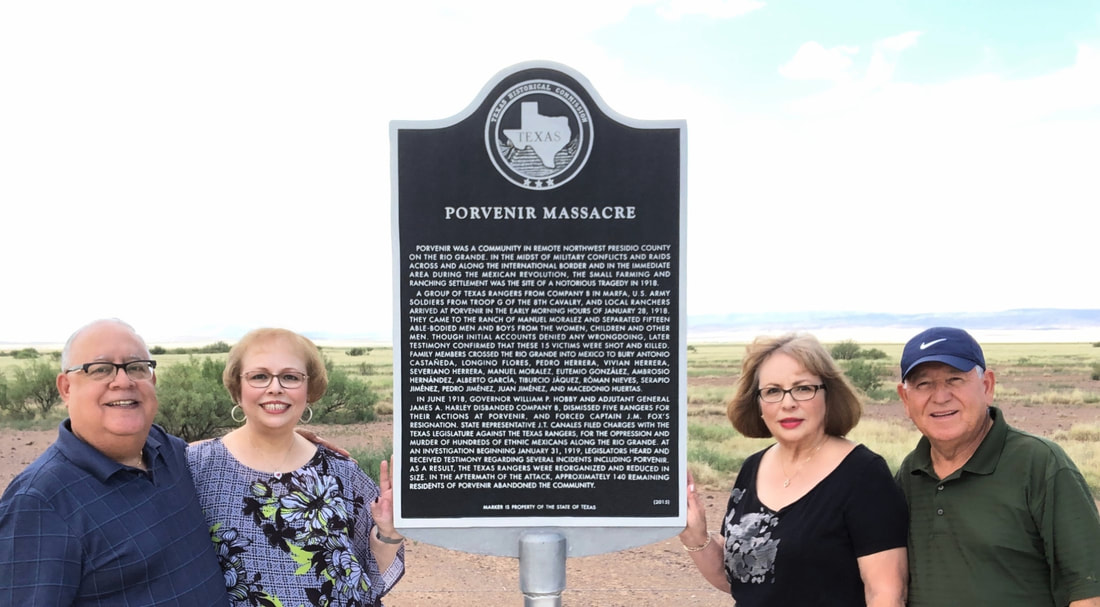 Ysrael and Arlinda Valencia on the left and Elida and Jose Tobar on the right. They visited the historical marker on Monday, July 29, 2019 for the first time.​

The Porvenir Marker finally found its resting place.   Thanks goes to Dr. Monica Muñoz Martinez and the Refusing to Forget Organization for all their hard work. Since 2015 Dr. Martinez made it her goal to see a marker for the Porvenir Massacre cast. Thanks for all of her efforts. Congratulations! 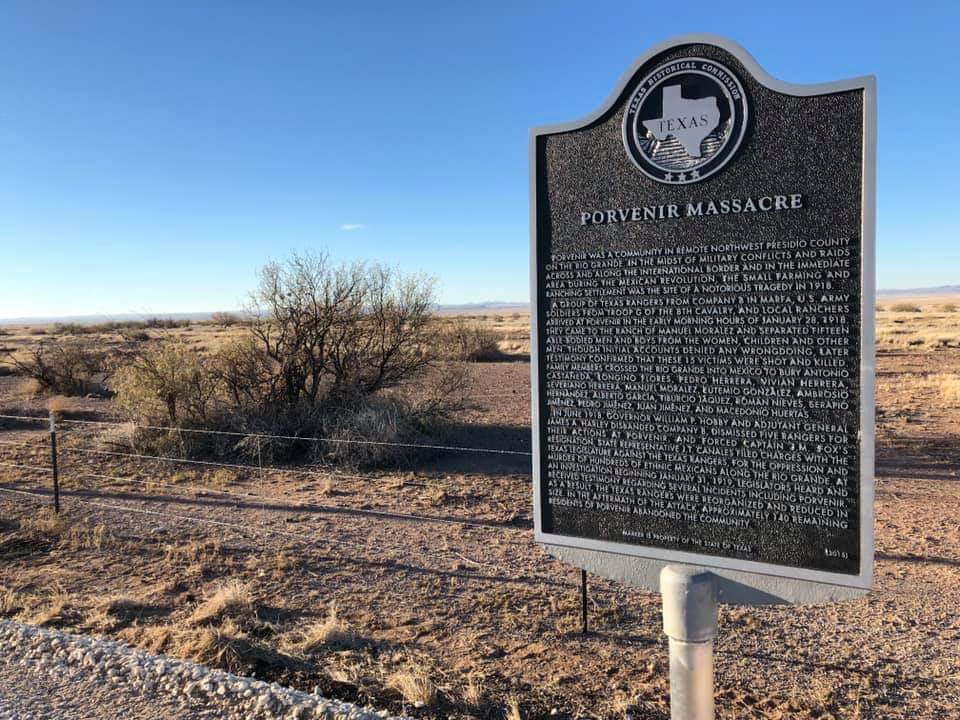 Here are the coordinates of where the marker is located.  It is  southeast of coordinates 30.513953 lat, 104.405252 long, and southeast of the county boundary sign in the photo. This is the closest public road to Porvenir, which is another 28 miles west-southwest from U.S. 90, along the Rio Grande and over the Sierra Vieja Mountains which are visible from the road (right-center of photo). The county seat, Marfa, is about 50 miles east of Porvenir.

Descendants visiting the marker.  Please send in your photos! 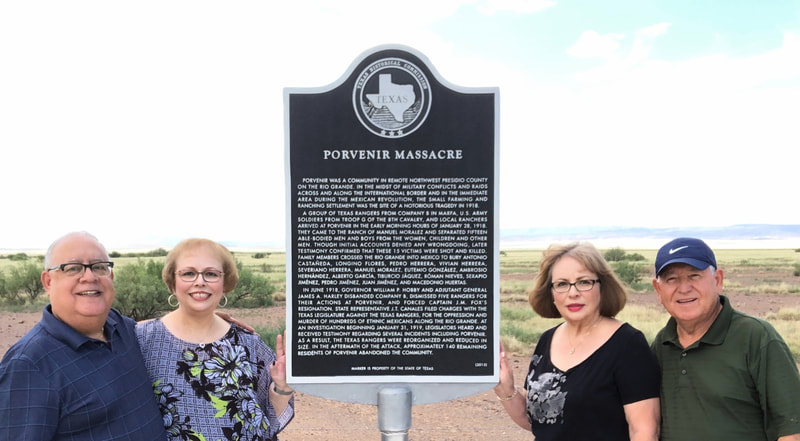 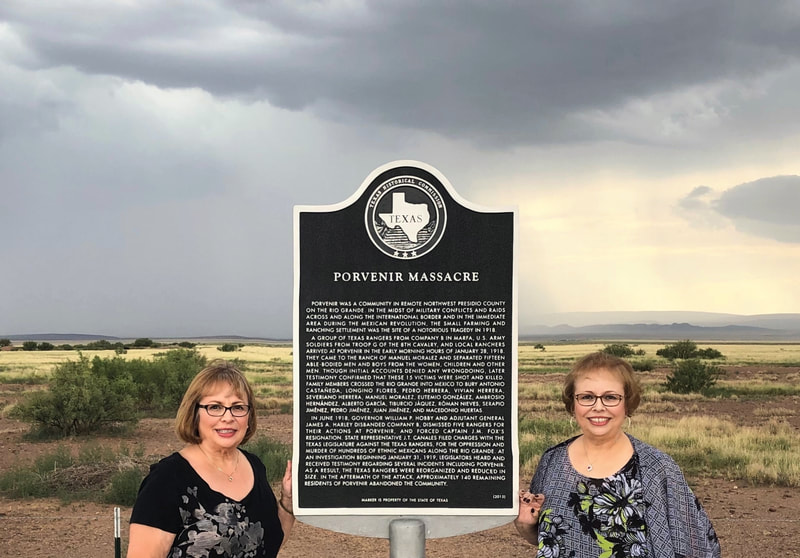 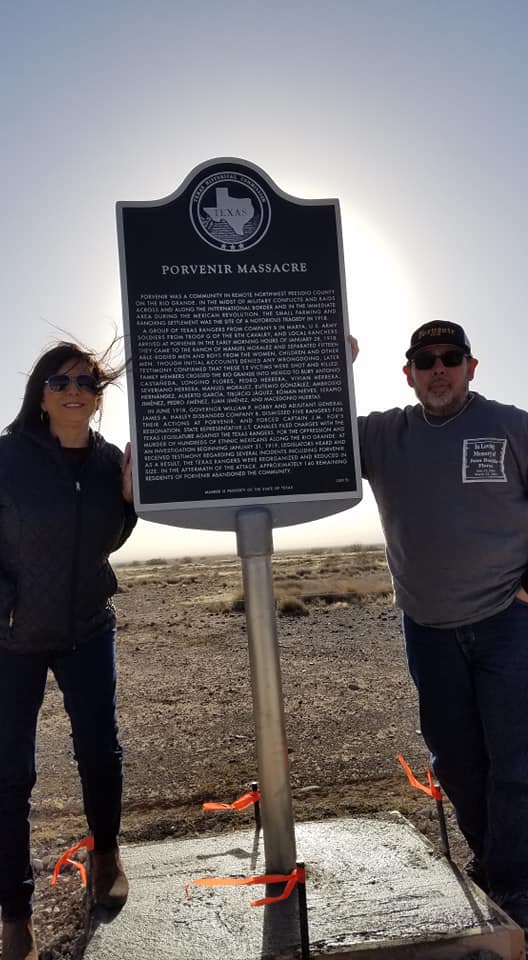 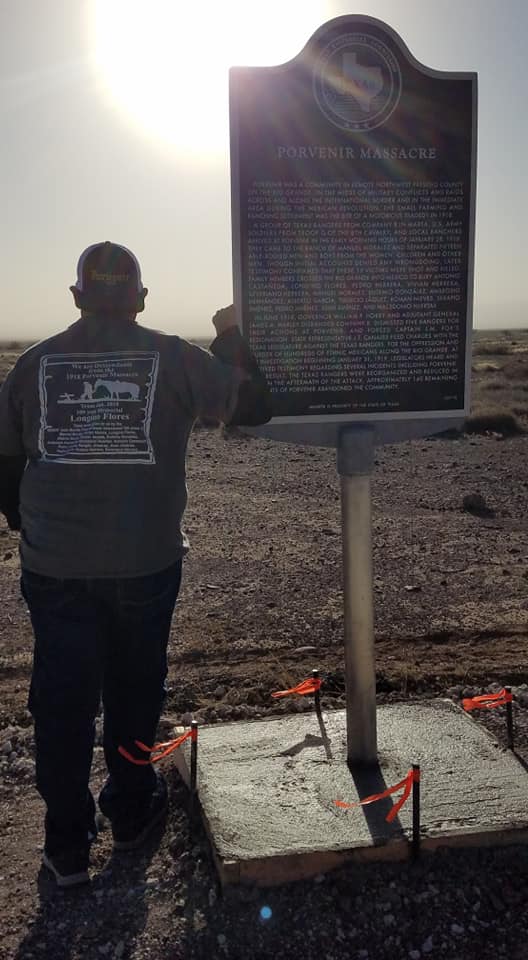 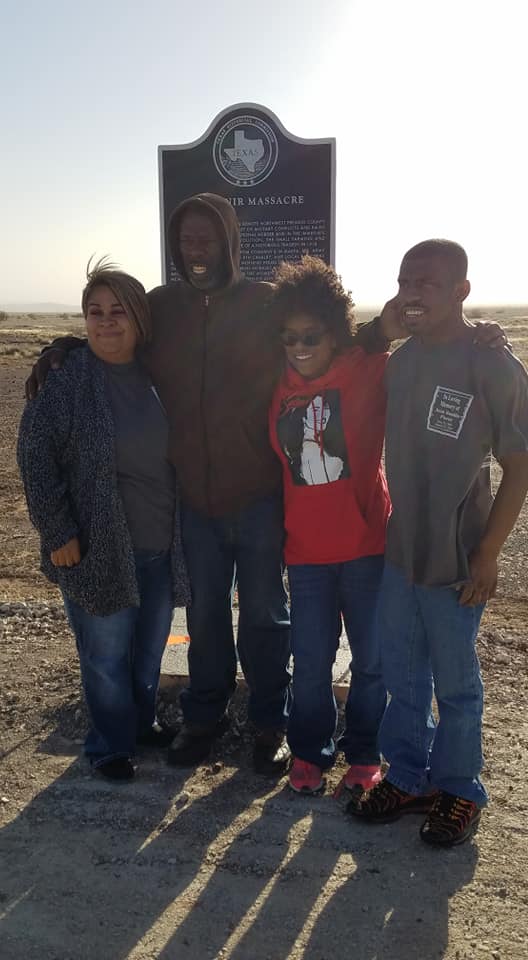 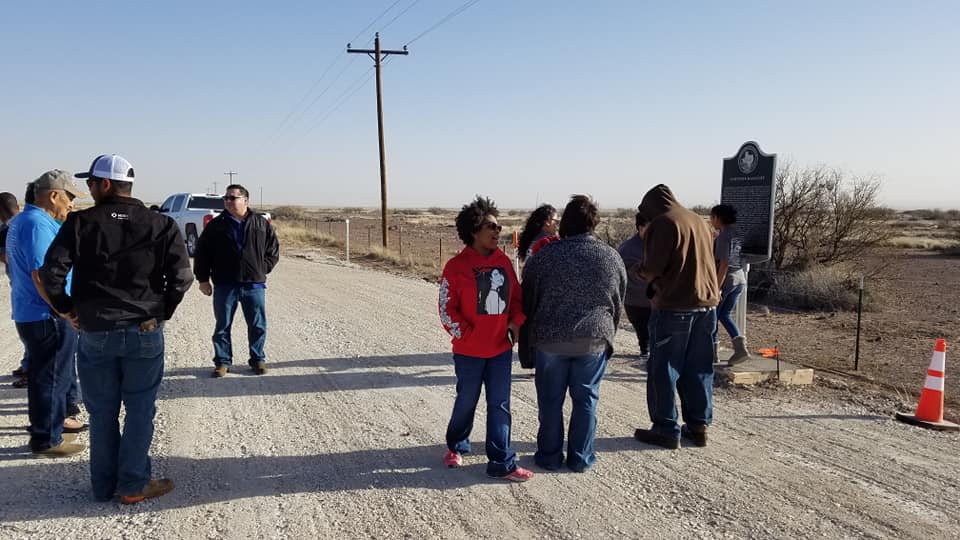 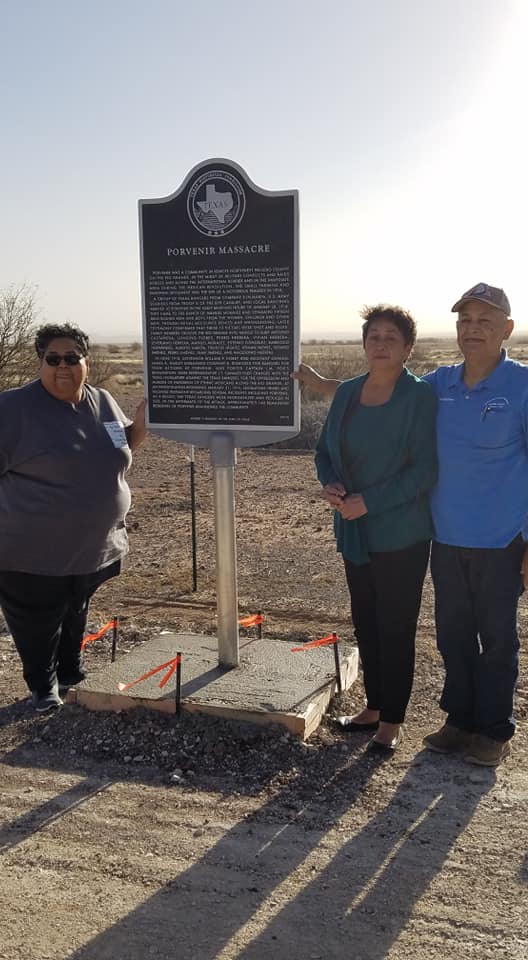 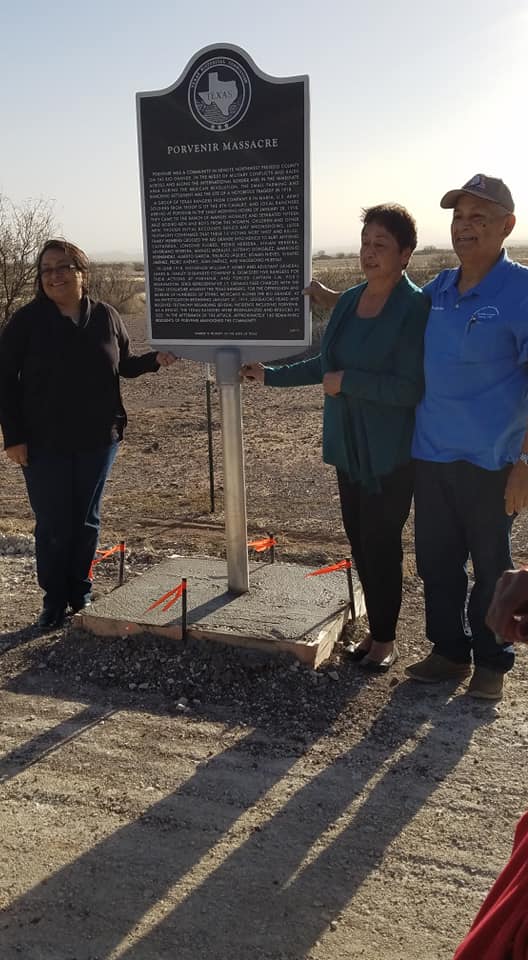 Who Writes History? The Fight to Commemorate a Massacre By The Texas Rangers 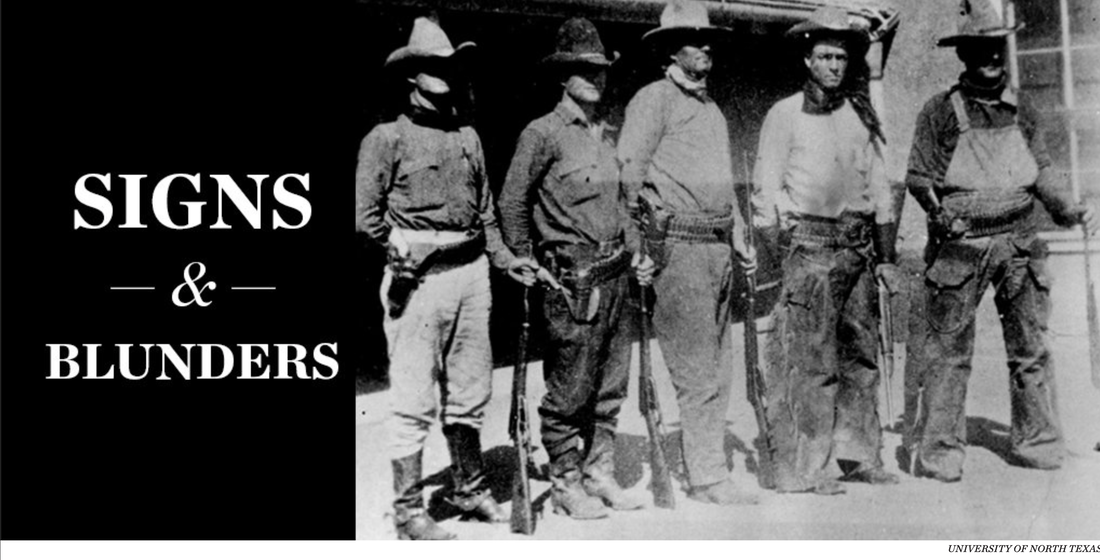 ​​www.texasobserver.org/who-writes-history-the-fight-to-commemorate-a-massacre-by-the-texas-rangers/
Dr. Monica Muñoz Martinez worked with the Texas Historical Committee since 2014 on the Porvenir Historical Marker.  She submitted her application under the Undertold Marker Program.  Under this program, the county that the marker will be placed in does not have to be informed or involved.  For years, many descendants had tried to get a marker through the PCHC without any luck.  If it were true that they wanted it they could have done it years ago. Instead, they waited until two weeks before the Sept 1, 2018 unveiling to protest it and claim that they wanted it too.  Dr. Martinez  worked on the inscription for the Porvenir Historical Marker with the THC for  four years.   Every historical fact was checked and rechecked and finally on July 27, 2018 the THC approved it and the unveiling went forward. The information below is the evidence that shows how the Presidio County Historical Committee through false allegations put a halt to the Sept. 1, 2018 marker unveiling.

Aug. 3, 2018 Mona Garcia sends email: “The PCHC has a problem with our untold stories marker, that was text approved and placement approved by Bob Brinkman at THC, who told us that the marker unveiling would take place on Labor Day weekend on Highway 90 near Chispa Road, that leads to the original site of Porvenir... Mr. Brinkman is now on vacation until August 13. PCHC has had the rug jerked out from under our PCHC by militant Hispanics from all over the country... after receiving the text from Dr. Mariano Garcia, Professor of Chicano Studies, who asked that I approve his text so that a maker could be created with his text...our commission worked on the text for a year.
The militant Hispanics have turned this marker request into a political rally and want reparations from the federal government for a 100 year old plus tragic event... Many of them claim that they are descendants of the Mexican men and boys that were killed by the United States 7th Cavalry and Texas rangers..."without provocation"! President Woodrow Wilson, gave orders to"take care of the border raids, after many years of rape, robbery and pillage along the international border with Mexico, due to the easy pickings on the American side and the reason the U.S. Cavalry was asked by people from California, Arizona. New Mexico and Texas to send the U.S. Army for their protection.
My property, Building 98, at old Fort D.A. Russell was built between 1890 and 1920 as a BOQ for West Point Mounted Cavalry Officers. Among whom were the Colonel George Patton and "Black Jack" Pershing and many other famous military officers.
The afore mentioned militants, have usurped our responsibility and efforts and that of the State Historical Commission by holding the unveiling in El Paso at the McGoffin mansion historical property. The marker text was changed by them after our text was approved by THC with a THC commitment that the State would place the marker in the place chosen and approved by the State and paid for by THC.
These Hispanics have had the adaucity to invite our PCHC Commissioners to the unveiling ceremony of the marker created and paid for by the State to invite our Commissioners to the unveiling in El Paso! This has become a political football.
As the PCHC Chairman, I have now contacted our Presidio County Attorney, Mr. Rod Ponton, who will send a letter of protest to THC regarding this matter. I have also contacted former Supreme Court Justice, Wallace Jefferson, who is now on the Board of Directors of THC. He is an old friend who served as Supreme Court Justice when my husband was a member of the State Bar of Texas. I am a life member of the Texas Lawyers Auxiliary and know Mr. Jeffersons wife who is also a TLA member. We are also old friends and supporters of Jerry Patterson.
I have also been in contact with Glen Justice. He shared with me just yesterday, that he has been doing research on Porvenir for over 30 years as he has a home on the Rio Grande, near where the sad event took place on January 1918 as a result of the Brite Ranch raid on Christmas Day afternoon, 1917.
Mr.Justice has a home in Odessa, TX, whose wife was terrorized by these militant Hispanics, who arrived when Mr. Justice was not at home and took/stole some of the artifacts that he had collected over many years... He and Jerry Patterson have been planning and filming a movie about the story of the "Porvenir Massacre"... They plan to have it on Netflix, etc. The timing is interesting given the very political climate of our Nation at this time...
Needless to say that PCHC is shocked at this bizarre development. Please see that this information is known within THC.”

The letter that Presidio County Attorney wrote to the THC is below.  Click on each page to read. 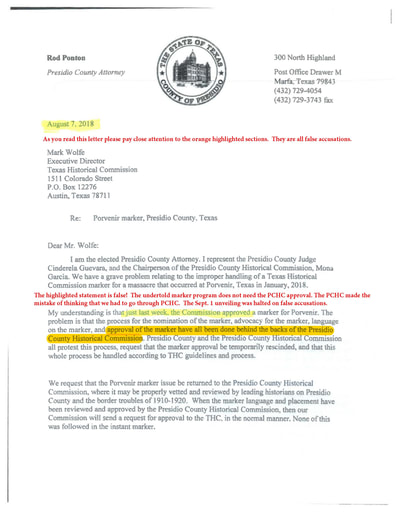 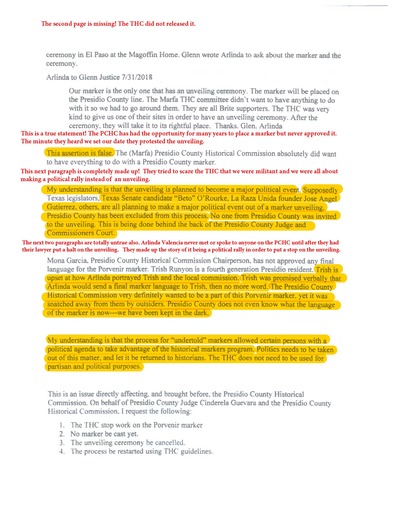 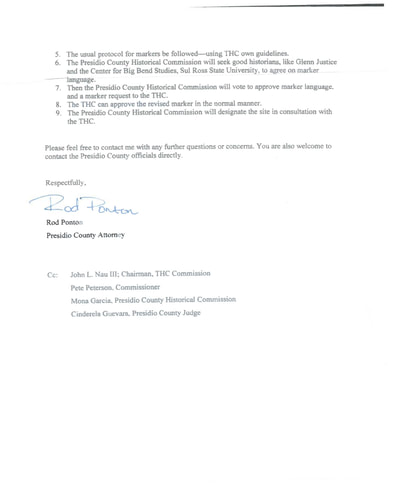 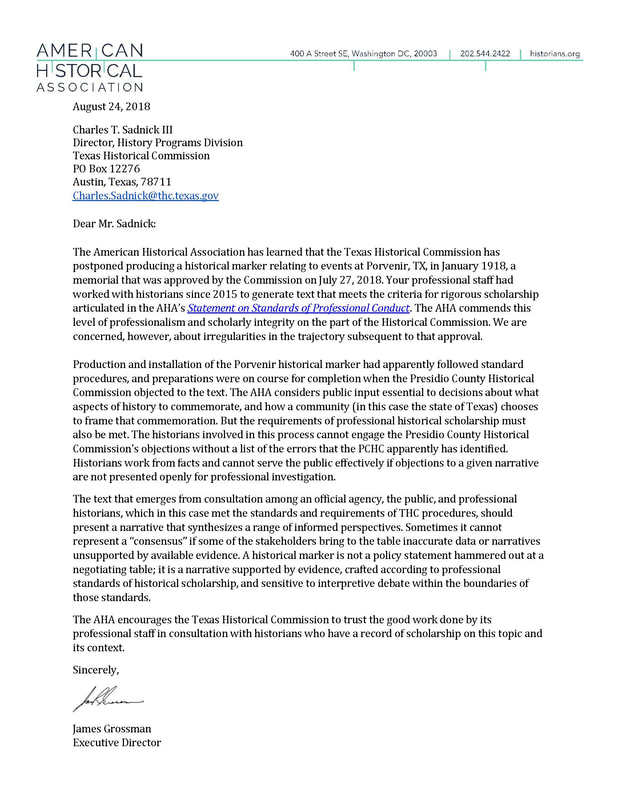 ​Arlinda Valencia - Descendant questions the validity of halting the unveiling. 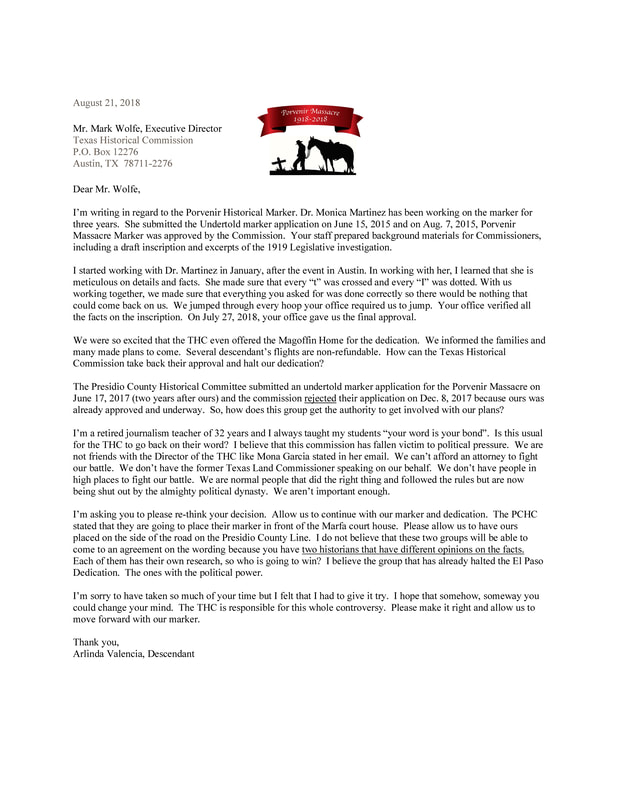 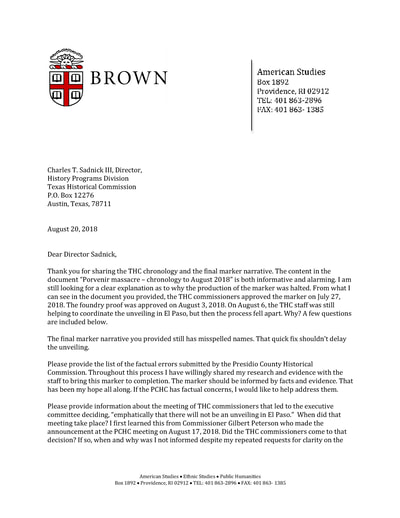 Refusing to Forget Organization ​questions the validity of halting the unveiling. 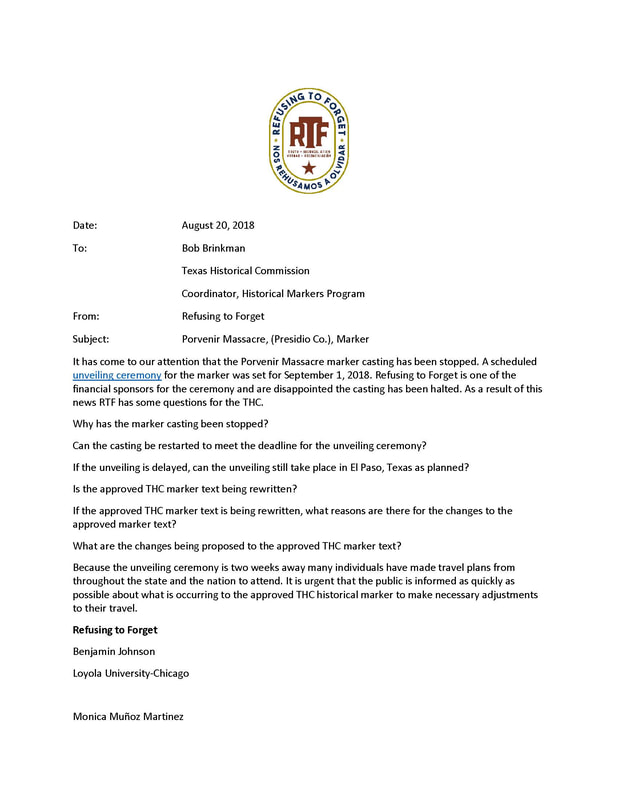