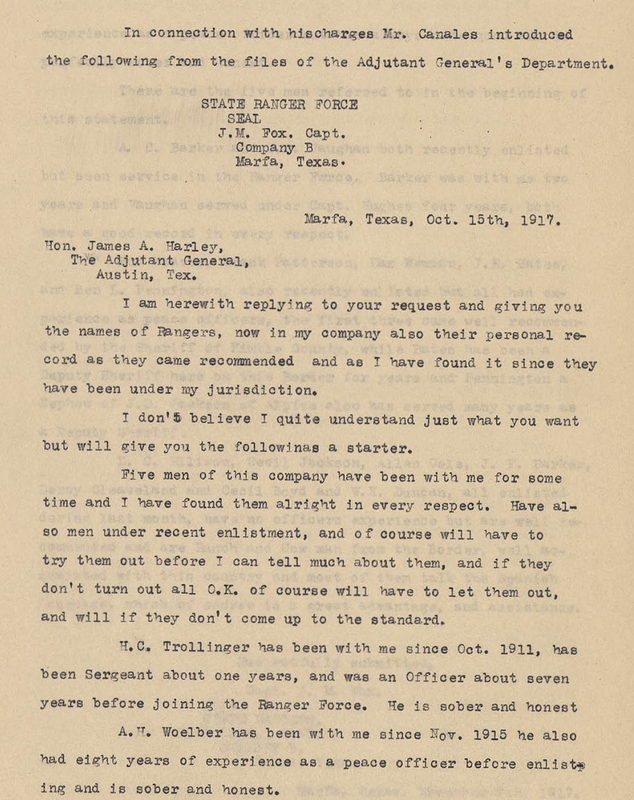 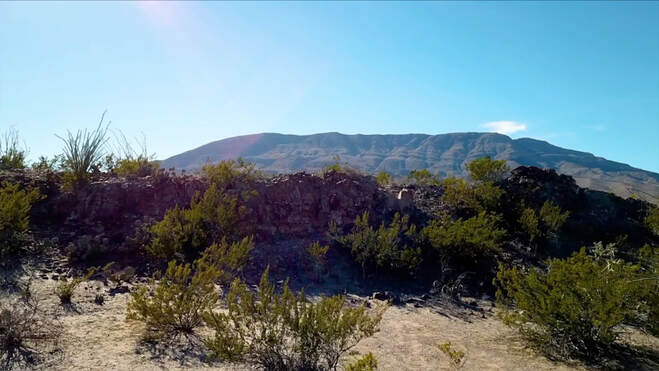 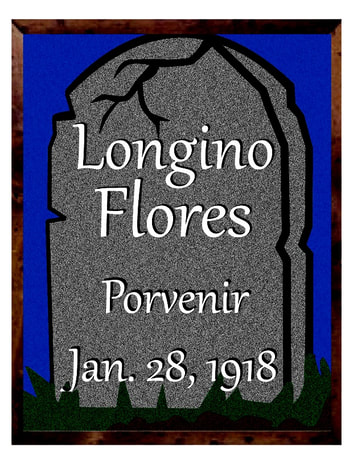 In 1910, the Mexican Revolution sent many Mexicans running over to the American side because of the violence during the war.  Our family wasn’t any different.  They must have arrived soon after 1910.  Our research didn’t find Longino Flores (44) and his family in Porvenir, Texas in the 1910 census and the massacre happened in 1918.  So, during the 8-yr. span they arrived at Porvenir, Texas and built their home and made a good living for their family.  Longino Flores was married to Juana Bonilla.  They  settled down and started a new life in Porvenir hoping for a better future for their 3 children. The family consisted of Longino Flores, his wife, Juana Bonilla, their eldest daughter Benita, and two boys, Narciso and Juan.  The family was very close and each of them had daily jobs to do in order to help their family.  Benita would help her mother while Narcisso would help his father.  Juan was responsible for all the goats.  He loved his goats.    Rosendo Mesa was my grandfather and he arrived in Porvenir, Texas between 1910 and 1914.  Rosendo and Longino were good friends and they worked together.  Rosendo was single and like so many in those days, the marriage between Benita, the eldest daughter and Rosendo was a match.  Rosendo was 39 yrs. old and Benita was 15 yrs. old.  In today’s world, an arrangement like that would never happen but in the early 1900’s, it was normal.  Juan Flores told us the story about their marriage.  Porvenir did not have anyone to marry couples so they had to travel elsewhere to get married. On Tuesday, March 10, 1914, the wedding couple traveled to Van Horn, Texas to get married by Justice of the Peace Lester S. Smith.
Juan stated that it was one of the happiest days that he remembered because when they got back from Van Horn, they had a huge celebration.  There was food and dancing for everyone at Porvenir.
When he told us the story, his eyes lit up and he was smiling from ear to ear.  I got to thinking about all the people at Porvenir being so happy celebrating, not knowing that 4 years later it would all disappear overnight.

It also got me to thinking about all the births that happened in Porvenir.  Many children were born at Porvenir, TX including my Uncle Rosendo Jr. who was born on April 24, 1915 and my Aunt Rosa was born on August 30, 1917.   At the time of the massacre, 47 children were left fatherless.  It’s unimaginable to think what these children and their mothers must have suffered.

I also think about how my family would not have existed if my grandfather had not survived.  Rosendo Mesa was wanted by the ranchers and Texas Rangers but as fate would have it he escaped being killed because he was on an overnight trip to get supplies.

Juan Flores is the most famous of the Flores’ because he was the last living massacre survivor.  Many don’t know that Narcisso, his brother survived the massacre too.  Rosendo and Benita were blessed that they and their two children survived too. After the massacre, Rosendo Mesa became the sole provider of the Longino Flores' family and his own family with Benita.  Juan Flores, the youngest son to Longino Flores became the  last surviving person that was there to witness the tragedy and to live and tell about it.  He kept the massacre a secret until Elida Tobar and Arlinda Valencia confronted him in Odessa, Texas in 1996.  After proving that the massacre had been documented he opened up and began to tell his story to his family and to anyone that wanted to know.  Because of Juan Flores major details of the massacre have now been documented.  Juana Bonilla Flores struggled with the death of her husband, Longino Flores.  She suffered for many years with what we now know as PTSD today.  The end result came when she took her own life. 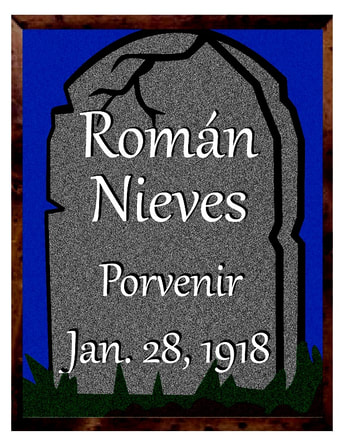 ​Roman Niéves was married to Alejandra and they had 7 Children: Ventura, Margarito, Matilde, Francisco, Casimiro, Yner and another child was born on three months after his death.

Nieves family made a trip to Porvenir in 1978.  The trip was very heart-breaking and emotional for all who went. 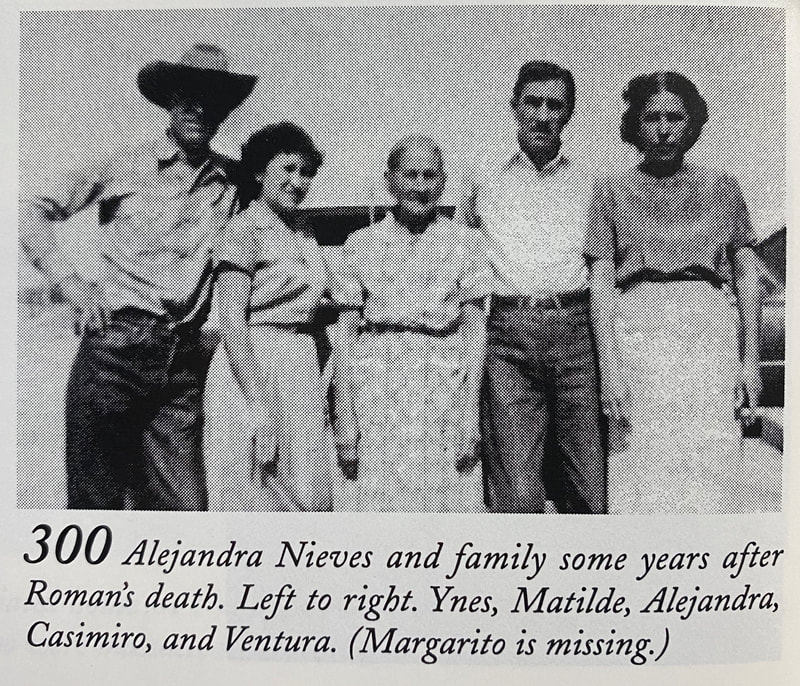 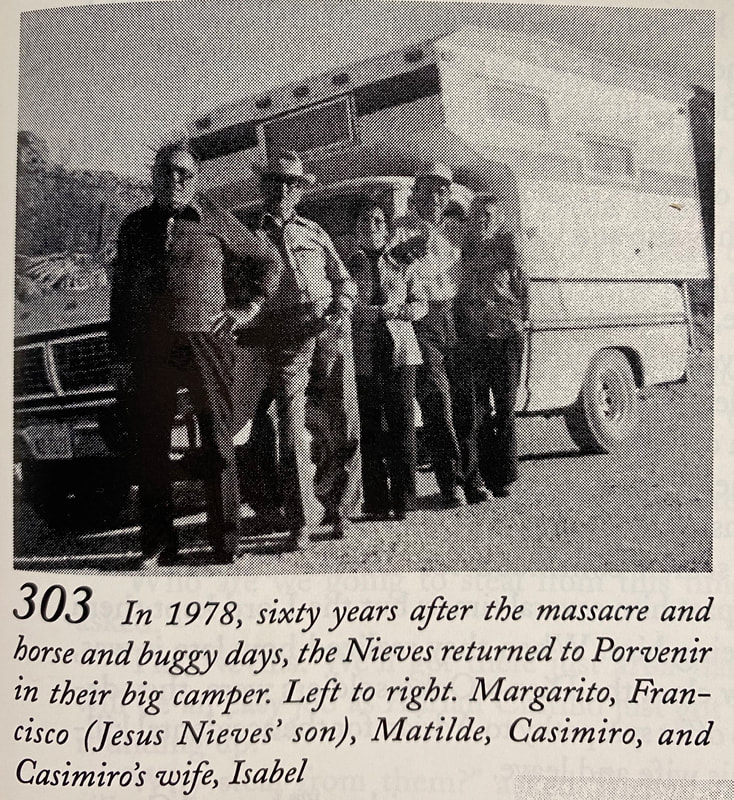 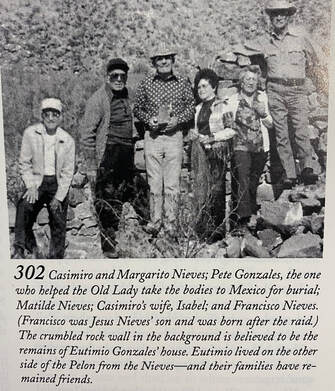 Angie Herrera is a descendant of the Herrera family who lived in Porvenir, Texas. This family lost three brothers Pedro (25), Vivian (23) and Severiano Herrera (25) in the Porvenir Massacre in 1918.   They were very young and had only been in Porvenir 10 days. These Herrera brothers had two younger brothers, Martin and Santana.  Martin’s job was to take care of the soldiers’ horses.  Martin Herrera  was Angie’s grandfather.  She remembers her Grandfather telling her about the Texas Rangers coming and killing his brothers and left him for dead.  He had a scar on his forehead where the Texas Ranger hit him with the end of his rifle.  Martin’s mother Juanita Herrera fled to Mexico with his younger brother Santana Moralez Herrera.  Martin would cross over to Mexico to see his mother or to bring her back to the United States for short visits.  She couldn’t come back to live in Texas ever again.  Martin’s Grandmother Estefana cooked and cared for him in Candelaria, Texas.  Angie remembers her Aunt Consuelo had a picture of Pancho Villa and she proceeded to asked her Grandfather Martin some questions about the picture and her Grandfather Martin got very angry and told Aunt Consuelo to get rid of the picture. He said, “Because of them (Pancho Villa) they killed my brothers.
Angie said she started looking into the Porvenir Massacre after showing her father, Martin Chavez Herrera, Native American Pow Wows on YouTube.  Her father quoted her Grandfather’s words; “We had to deny our Indian Heritage and the Texas Rangers still came and killed my brothers.”

Alberto Garcia (35)  was married to Victoria Jiménez and they had 3 children Jorge, Celedonio, and Florencia.   Victoria not only lost her husband, Alberto but she also lost 2 brothers Serapio and Pedro Jiménez (27) and her cousin Juan Jiménez (16).
Photos courtesy of Author Joyce Means: Pancho Villa Days at Pilares

Tiburcio Jaques (50) and Macedonio Huerta (30) were both lost. Tiburcio was married to Librada Montoya and they had 8 Children: Maria, Jose, Cecilia, Marcelo, Alberto, Ezequiel, Rita , and Juliana.  Rita Jácquez was married to Macedonio Huertas.  Juliana Jáquez was married to Harry Warren.  Harry Warren was the school teacher who documented the massacre.  Without his documentation, the Porvenir Massacre would have vanished and the story would never have survived.  Olivia Warren Morales is the last living granddaughter of Harry Warren.  She resides in El Paso, Texas.
​ 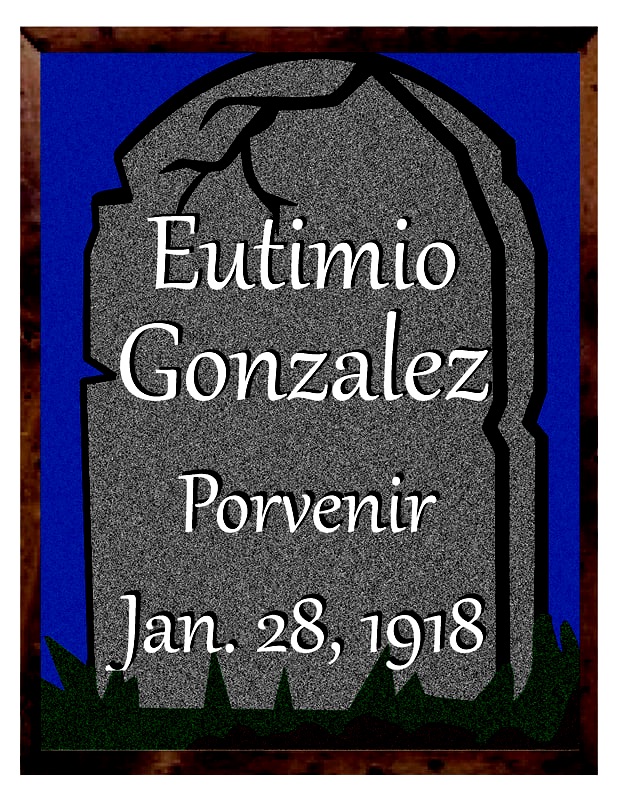 Eutimo Gonzales and Conception “Chona” Carrasco married on March 6, 1896 in Marfa, TX. Eutimo Gonzales: Place of Birth unknown. Parents: Lojio Gonzales and Santos.  Conception “Chona” Carrasco: Place of Birth Fort Davis, Texas December 8, 1866.   Parents:  Urbano Carrasco and Geromina Mata.  Children of Eutimo and Conception:  Listed with date of birth and Godparents first and then a brief summary.
Eulalia - February 13, 1897: Eltera Gonzales and Dolores Corrales
first married Ambrosio Hernandez and had a son Victor. Ambrosio was killed along with Eutimo outside of Provenir Texas on January 15, 1918. Eulalia’s second marriage was to Isabel Sanchez. They had four children: sons Thomas and Cruz and daughters Elvera and Elodia. Thomas and Elodia have passed and Cruz and Elvera still lives in Valentine, TX. Elodia passed in 2016.
Francisco - April 4, 1899: Fernanda Renteria and Dolores Flores married Augustina Bustamantes who had a son before marriage named Ernesto. Francisco and Augustina had five children together, three sons: Marcio, Ervey and Israel and two daughters Dora and Elise. Ervey and Dora have passed away and all other children live in California.
Marcio passed in 2016. Known as Frankie. Worked at the railroads in Valentine, TX. Then moved to Carlsbad, New Mexico and worked at the Air Force base. He divorced Augustina. Then moved to California. There are photos. He was short… 5’ 2’’ like his sisters.
Pedro – October 23, 1902: Jose Bensor and Conception Calanchi married Petra Martinez and had eleven children: eight sons Roberto, Eutimo, Jesus, Jose, Edwardo, Loranzo, Pedro and Ricardo and three daughters Maria, Genova and Linda. Roberto, Eutimo and Jesus have passed away. Pedro, Maria and Genova live in California and all other siblings live in El Paso, TX. Petra and Linda passed in 2016. Lived in El Paso, Texas.
Santos – September 20, 1905: Siprano Lujan and Braulia Dominguez married Lewis Gomez and has three children: sons Alfredo and Mayo and a daughter who died at birth along with Santos. Both sons have passed.  May have lived in Toyah, TX.
Refugia “Cuca” – July 4, 1907: Calistro Carrio and Liandra Lujan married Manuel Garcia. They had seven children: two boys Ambrosio and Manuelito and five daughters Pauline, Ida, Norine, Lilia and Beneralda “Bennie”. Ida, Pauline, Manuelito and Lilia have passed. After Proviner moved to Valentine, TX.  and then picked Cotton in Carlsbad NM. That is where she met Manuel. All sisters were 5’-2” and married 6’-2” men. Raised their family in Carlsbad NM. Left Carlsbad in 1945 to Buttonwillow, CA to reunite with Manuel’s brothers and sisters (Carmen, Lalo, Sisto). They all worked as farm laborers: Cotton and potatoes. They worked through Napa and Visalia, settling in San Joaquin, CA in 1950.They raised their family in San Joaquin. Very good housekeeper. A pretty good cook and was a great manager. Always provided for the family and stretched the resources. Always made oatmeal and coffee for Manuel. Made the beans last until Friday and always had something to eat. Made a bean gravy soup and as long as there was flour there was something to eat.
Lusiana – April 4, 1909: Calistro Carrio and Liandra Lujan died at the age of six from influenza. Died before the 1918 Porvenir Massacre.
Andrea – February 4, 1911: Calistro Carrio and Petra Ontiberos had a son out of marriage fathered by Daniel Acosta, the son’s name was Robert Lee Gonzales. Andrea later married Inez (Nehi) Estrada. Andrea has a grandson named Robert Lee Gonzales (son of Robert) and lives in Hobbs, New Mexico. Andrea’s son Robert died in a car accident on
May 5, 1953. Andrea worked as a housekeeper in Carlsbad NM. Suffered from cirrhosis and a skin condition (maybe eczema or dermatitis). I met her once.
Geromina - March 13, 1913: Patricio Flores and Mersed Pena died at the age of four from influenza. Died before the 1918 Porvenir Massacre.
Blaza – February 3, 1915: Manuel Fierro and Elena Dianda married Ramon Hernandez (died when I was a baby) had had several children but all died at birth or after a few days. They had three surviving children Hilda, Eddie and Ramon (Ray). Hilda married Fred Young and had no children. Ramon married and had two children Raylyn and Anthony and live in Cerritos, CA. Tia Blaza was a very happy and kind woman. Her smile was infectious. She was an excellent baker and always had wonderful hospitality. Her daughter Hilda was very fun and boisterous, very tall and blonde. They lived in LA, and seemed like Beverly Hills when I would visit.
Micheala “Mickey” – March 15, 1917: Raphael De La O and Manuela Mickey married Silvestre “Ette” Griego and had one son George who died at the age of 32. Tia Mickey, was also very kind but tough. She too lived in LA and we would visit over the summers. Tio Ette was a very big man with lots of personality and a great big laugh.
This is all that is known about the Family of Eutimo Gonzales. 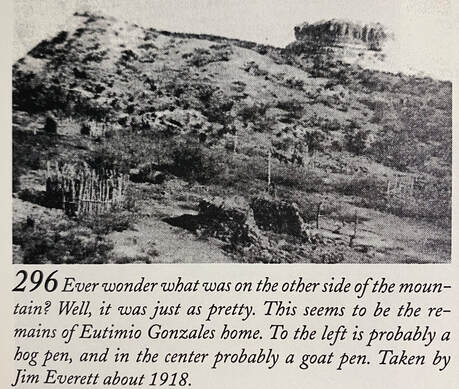 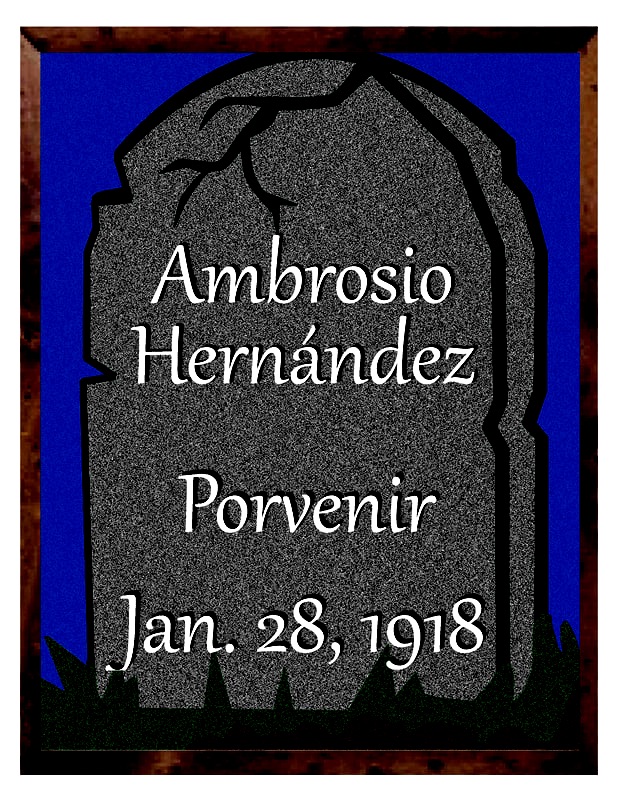 Ambrosio Hernandez (21) was married to Eulalia Gonzalez and they had one child, Victorio. 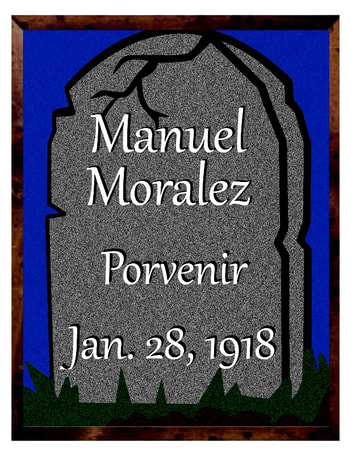 Manuel Moralez (47) was the land owner at Porvenir.  Manuel was married to Francisca Hernandez and they had 6 Children: Leandro, Jovita Eustacio, Manuela, Juanita and Julia who was born on the very night her father was killed.  ​ 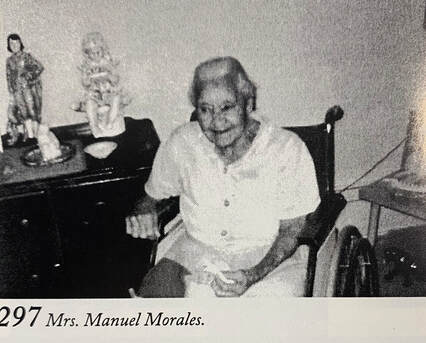 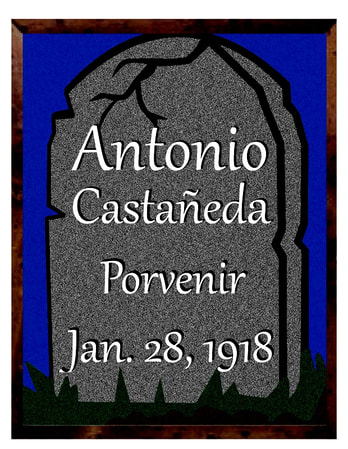 Antonio Castaneda (72) was married to Felipa Mendez.  We know very little about this couple except that they had only been in Porvenir for three weeks. We also discovered that his father-in-law, Juan Mendez, owned a newspaper in Pilares, Chihuahua, Mexico and that because of him, affidavits were taken and signed from the families and in turn asked the Mexican government for assistance and the Mexican Ambassador Ygnacio Bonilla asked for an investigation.  Thus, making this an International incident.