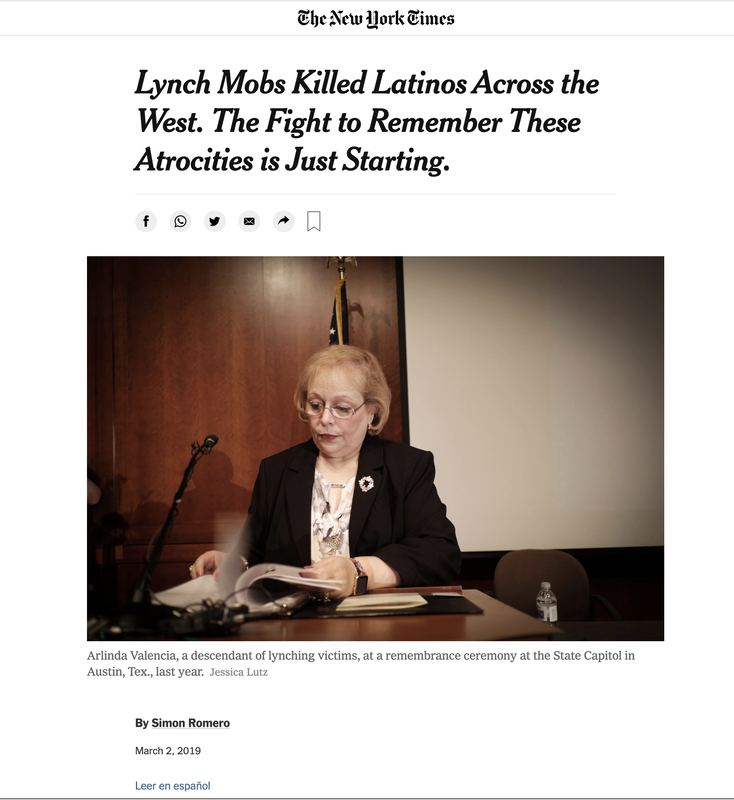 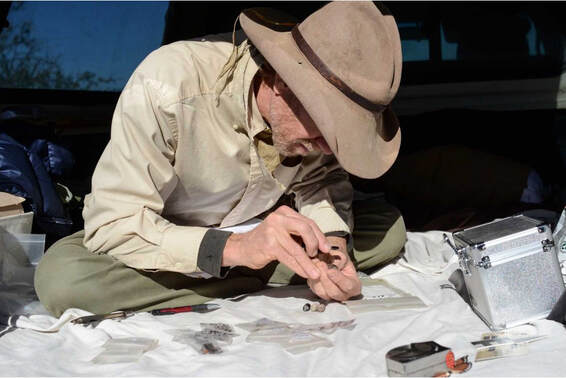 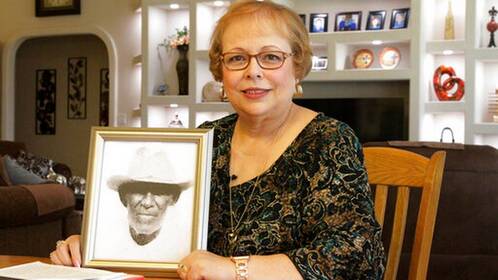 In this April 30, 2019, photo, Arlinda Valencia poses at her home in El Paso, Texas, with a portrait of her great-grandfather Longino Flores, who was murdered at the age of 44 by Texas Rangers and U.S. Army soldiers in the Porvenir Massacre of 1918. As the U.S. prepares to remember the 100th anniversary of "Red Summer," a period in 1919 when white mobs attacked and murdered African Americans in dozens of cities across the country, some historians and Latino activists say now also is the time to acknowledge the terror experienced by Mexican Americans right before that brutal year. CEDAR ATTANASIO AP PHOTO 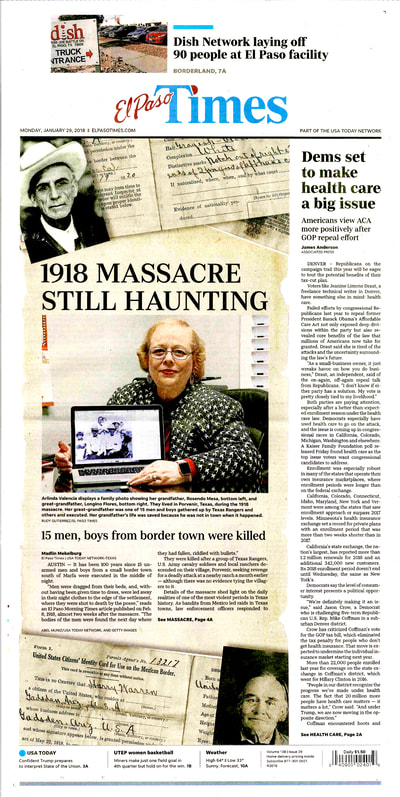 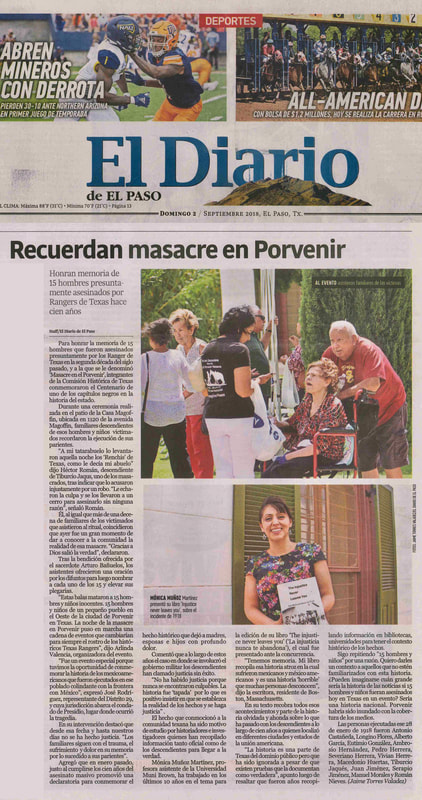 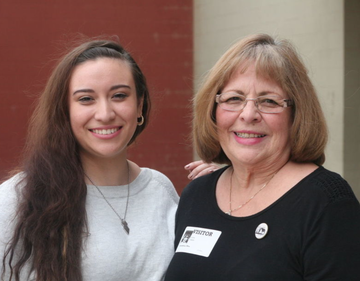 Submitted by: Elida and Brandi Tobar 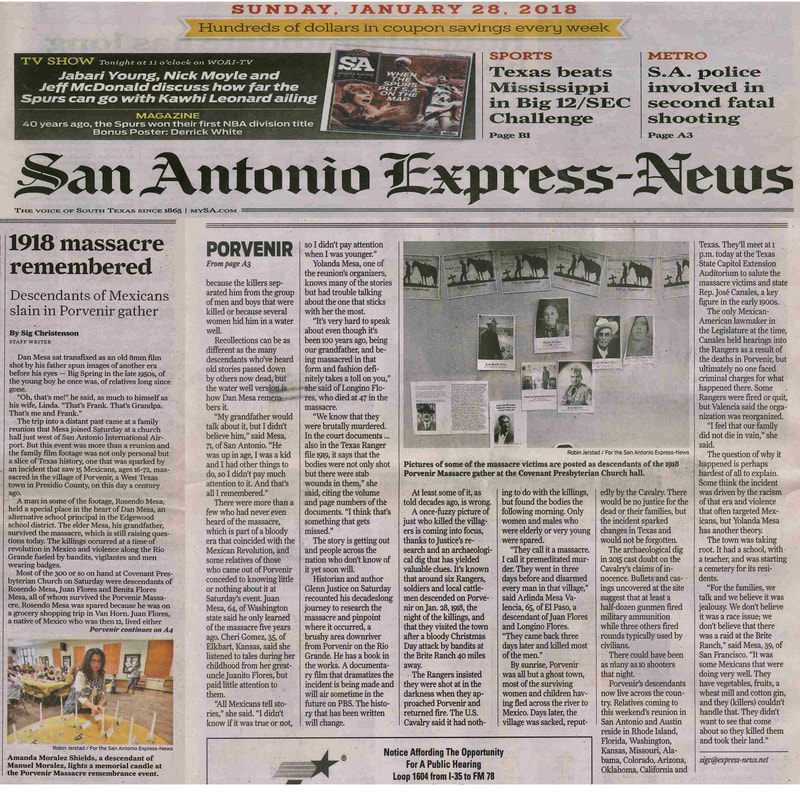 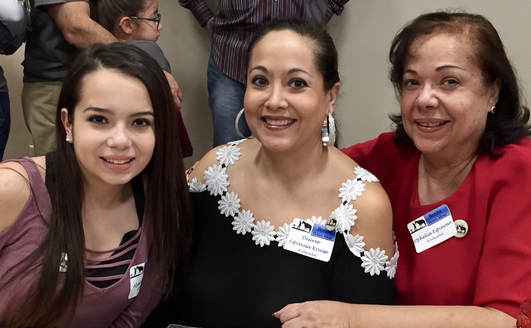 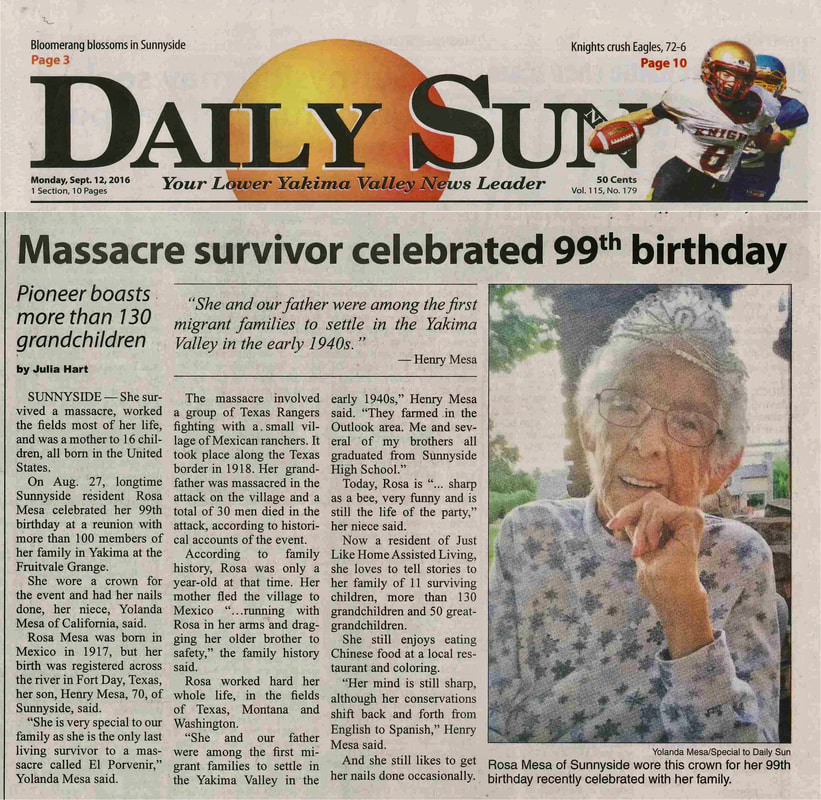 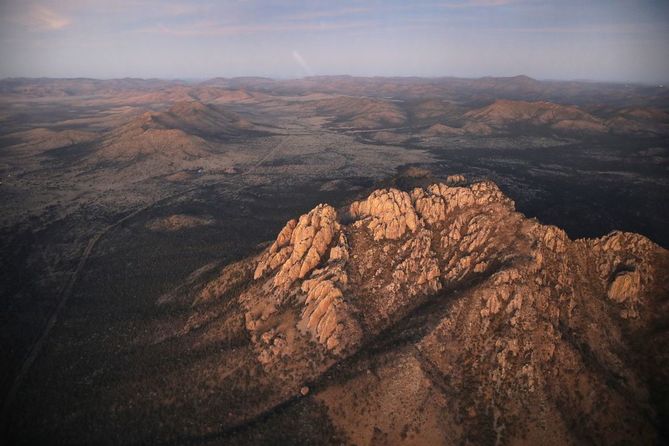 Photo by John Moore/Getty Images
By Josh Duggan@oldmanduggan  May 24, 2018, 4:40pm EDT
On the 28th day of January in 1918, Texas Rangers aided by US Cavalry soldiers and local ranchers filling out the posse executed 15 villagers from the tiny Presidio County village of Porvenir. Situated on the Rio Grande, across from Pilares, Chihuahua, Porvenir was in the wrong place at the wrong time. With the Mexican Revolution raging for its eighth year, raiding parties of Villistas and Carrancistas spilled over into towns and ranches near the border, most notably in Columbus, New Mexico but most pertinently to this incident at Brite Ranch on Christmas Day of 1917.
In the Brite Ranch raid, a handful of Anglo settlers died protecting the property as a raiding party of 45 presumed Villistas (there is some disagreement on who comprised the raiding party, as Carranza’s men have elsewhere been implicated) overran the ranch and made off with horses and clothes, food, and money stolen from Lucas Brite’s general store, killing an unsuspecting postman Mickey Welsh and his two Mexican passengers when he went to the general store surely unaware the raid was transpiring. With Welsh hanging from the rafters of the general store and supplies in hand, the raiding party raced back to Mexico.
The next day, a punitive expedition led by Col. George Langhorne and comprised of some 200 U.S. Cavalrymen and some area ranchers ventured into Chihuahua after the raiding party and caught up with 29 raiders in San Bernardino Cañon just outside of Pilares, Chihuahua. Ten of the raiders were killed in the skirmish that played out, and some of the stolen property was recovered, though the horses that were seized had to be put down as they’d been ridden too hard to make it back to Brite Ranch.

Outrage followed, and Texans of the Big Bend region formed a committee whose goal was to disarm all of the people of Mexican descent in the area—an area that was, of course, part of Mexico just 70 years earlier—and then monitor them and their activities.

That wasn’t enough for the Texas Rangers Company B led by Captain J. Monroe Fox. They entered the village of Porvenir on January 26, 1918 and searched the homes of villagers for weapons, turning up just a single pistol belonging to one of the Anglo residents and a single Winchester rifle belonging to one of the Tejano residents. The weapons were confiscated, and three of the Tejano male villagers were arrested and taken to the nearby Ranger encampment, where they were detained.
The next day the three were released, but just after two of them returned to Porvenir late that night, Fox’s men came back into the town. Despite having no evidence tying the citizens of Porvenir—tragically “porvenir” means future in Spanish—the party of ten Texas Rangers, eight US Cavalrymen, and four local Anglo ranchers pulled everyone from their homes, and separated 15 Tejano men and boys from the populace. The Rangers and ranchers marched the ill-fated 15 out of town to a nearby hill and executed them, while the soldiers stayed back and kept the coast clear.
The following day, 13-year-old Juan Flores and his white school teacher Henry Warren went searching for the men and found their bodies left where they were shot.

Fearing for their lives, the remaining 140 residents of Porvenir abandoned what had been their future, many of the Tejano residents crossing the border to live in Pilares, where the 15 victims were buried.
In the days following the massacre, soldiers from the US Army burned the abandoned village to the ground. Nearly a month passed before Capt. Fox reported the incident to Ranger command, and when he did report it, he claimed that villagers had ambushed his men and that stolen goods from Brite Ranch were found on the bodies of the men he had ordered executed. Both Henry Warren and Capt. Anderson of the US Cavalry gave contradictory accounts, stating that the Rangers and ranchers executed the 15 Tejano victims.
After an investigation conducted by Texas Rangers Command led by Capt. William Hanson concluded the men should be charged with the crimes, a grand jury in nearby Presidio failed to find any of the men involved in the crimes perpetrated against the 15 murder victims guilty in 1919. Ultimately five of the Rangers were relieved of their duties altogether—though Fox was not one of them—and the rest were reassigned.
Spurred by a slew of incidents State Representative José T. Canales of Brownsville started an investigation that led to a significant shrinking of the Texas Rangers force and newly implemented hiring guidelines. Throughout Canales’s pursuit of the truth, the then only Latino Texas state legislator received threats that he should abandon the investigation.
Governor William Hobby disbanded Texas Ranger Company B in June of 1918, this being far from the only incident of extrajudicial killing of Tejano citizens carried out by the group.
The bloodbath was shrouded in mystery for much of the next eighty years, as the federal government classified much of the information about the incident. Moreover, any of the surviving family members did not speak of the horrors that befell their husbands, brothers, and fathers, for fear of retaliation and repercussions.
As Glenn Justice reports, archaeological evidence uncovered in 2015 at the site--confirmed to be the scene of the crime by the aforementioned Juan Flores in 2002 [I cannot recommend this site enough as a resource on Texas border history and issues]—suggests there is more to the story:
With archaeological investigator David Keller concluding:
​January 28 of this year marked the 100 year anniversary of the horrific events at Porvenir.